Missing Maeve: Our Honorary Fellow, And Our Friend 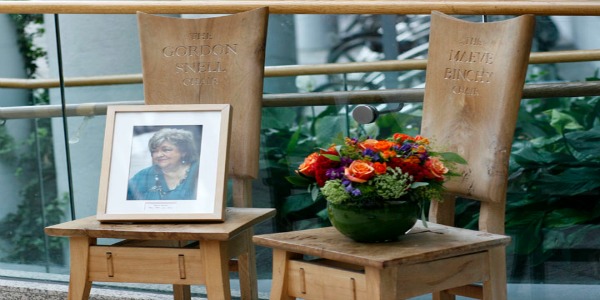 Today is the second anniversary of Maeve Binchy’s death, and we miss her greatly. Every day as we pass through the college Atrium, the Maeve Binchy chair reminds us of the warm and generous woman that many of us at NCI were lucky to have met, and to have worked with throughout the years.

Anyone who has ever read her books (and as Ireland’s bestselling author of all time, there are a great many of us around), will know how kind Maeve was. Her empathy and understanding shone through on every page. She, and her husband Gordon Snell, were great friends of National College of Ireland, and, in 2008, we were proud to award Maeve with an honorary fellowship with the words:

“Maeve’s literary genius is matched by her humility and her personal generosity and openness. It would be remiss of me at this gathering not to refer to her generosity and kindness to the students of the National College of Ireland where she initiated and led a writing club to motivate and encourage aspiring writers.

This club led to the publication of the book The Maeve Binchy Writer’s Club, which was launched in NCI and contains her 20 weekly letters to her students, as well as contributions from ten of the guest speakers on the programme.

Maeve believes that “everyone is capable of telling a story” – but I doubt if there are many others in the world who can tell a story as grippingly and sensitively, as Maeve can. Everybody entering the portals of NCI in recent months have seen Maeve and Gordon’s “chairs” in the foyer – a happy reminder of their support and kindness to the students and staff there.”

She remains an inspiration to us all.