A Year Off-Campus - Looking Back

Posted by Crowdsourced from NCI Students on 10 March 2021 March 2020 was all about future plans. The College was covered with flyers and balloons and it was impossible to walk through the Atrium without being surrounded by candidates for election to the students’ union canvassing for your vote. Noticeboards also advertised all the fun due to take place during rag week, to commence on March 23rd, and tickets for the Clubs & Socs Awards on March 28th; competing for space were posters about the latest in the series of careers’ events.

We all knew about COVID-19, most especially from the sad stories coming out of Italy, but it all still seemed far away from Ireland. However, our president, Gina Quin, announced on Friday 6th March that the College was taking the precautionary measure of postponing Spring Graduation, scheduled for March 19th: “While there is no current advice from the HSE to defer large gatherings, the College is aware that the situation is evolving.”

Monday 9th March, 2020, the previous weeks of campaigning, with posters and balloons throughout the campus, culminated in the first day of voting in the NCISU elections.

Tuesday 10th March, 2020, was a sporting day, both in the celebration of NCI’s win over UCC, making it to the final of the division 2 Colleges and Universities Cup, and in the launch of NCI’s scholarship partnership with Bohemian Football Club – lots of free merch and goodie bags were available in the atrium, and lots of buzz on social media.

Wednesday 11th March, 2020, we began to really feel the impending impact of COVID-19, with The Irish Times reporting that NCI, alongside other HEIs, was considering alternative assessments, instead of crowded exam rooms in the coming May.

Thursday 12th March, 2020, throughout the morning, even as we excitedly learned who our new NCISU team was for the year ahead, news trickled in of events cancelled or postponed – as a nation, we were beginning to keep our distance. 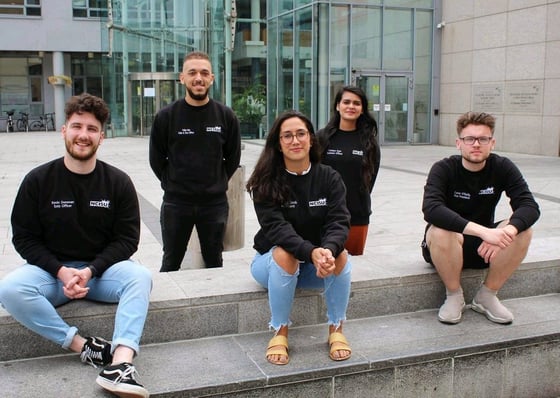 At 11.30am, An Taoiseach Leo Varadker announced that all schools and colleges would close that evening, no later than 6pm.

At 2pm, Student Services issued an email with information about online classes and access to the library and other supports, stating that the earliest return to campus was expected to be 30th March 2020.

Friday 13th March, 2020, we awoke to hear NCI’s win over Galway had secured us the division 2 CUFL cup and promotion to division 1, with NCI’s own Josh Hogan named man of the match, but we received this news, each in our own homes, facing into an expected two weeks of lockdown – never had Reading Week come at a better time!

One year later, and College has not reconvened on campus… so much for two weeks!

And look at what NCI students have achieved in that time:

The first online careers event took place as early as April, and by May we saw the online showcase of the final year Marketing projects and a week-long celebration of Project Showcase, culminating in a live awards presentation on YouTube. May also saw NCI receive the Pieta House Amber Flag award, largely due to the phenomenal work of the Mental Health Society.

Alternative assessments were to the fore of most students’ minds at this time and, while the College and Students’ Union offered every possible support and encouragement, it is a testament to the resilience of the NCI student body that the vast majority of students felt able to push on with their studies, even in a time of great uncertainty and additional challenge.

June brought with it NCI’s first online graduation ceremony, postponed from March. This month also saw the launch of the Master’s Edge scholarship, as the College responded to the slowing of graduate recruitment.

For many, the Summer months meant a break from College, but for a large number of students, this was Semester 3 and meant continued studies. They remained focused at their ‘studying from home’ desks, even through some of the nicest weather we’ve seen in years.

In July, we began to see pictures on social media from the campus of the changes that were being made, to allow for a safe return as soon as Government permitted – automatic temperature scanners, additional hand-washing and sanitising points, a one-way system clearly marked with 2m distance decals, and a new form to fill in should you wish to attend on campus, restricted only to essential visits.

Online life was more regular now for those who had made the move off campus in March – MS Teams classes and alternative assessments and breakout rooms and accessing the online library and all student supports via the ncirl.ie website or through Moodle or by phone were acknowledged as a ‘new normal’. There were even occasions for sociability and general chats.

For Leaving Cert students, however, there had been no chance to develop any sense of routine. This is where a first-ever online orientation made sure that everyone felt welcome and knew what to expect – at least in that first semester: we still all lived in hope of getting back to campus soon. From cocktail-making masterclasses and music bingo to consent workshops and meet & greets, there was something for everyone as they started their time in NCI. The success of all the care shown to welcome all our new students can be seen not just in classroom attendance, but in their active participation in class rep elections and with clubs and societies – in fact, the entire committee of the Fashion Society is fully made up of First Years!

Semester 1 2020 was fully online, and freshers made new friends, even while not meeting in person, and NCI students continued to show themselves as made of strong but flexible stuff. NCI President, Gina Quin, continued to keep communications alive, emailing updates to students weekly, emphasising all the support available in the College and asking you to please reach out if you need any help at all.

The centrepiece of the semester was our online graduation: nearly 900 graduands shared the NCI filter on Instagram and Snapchat, with around 90,000 people viewing those images. Our five ceremonies had a worldwide audience of over ten thousand.

Of course, November is also Movember, and our Mental Health Society raised over €3,500 for men’s health, spending the month clocking up the kilometres, issuing daily ‘mo’ updates, and general, good-willed fun, which brought a real sense of community to all those involved and reminded us how much we can achieve when we work together. Another end product of the month was a moustachioed Daniel Flanagan, president of the Mental Health Society: 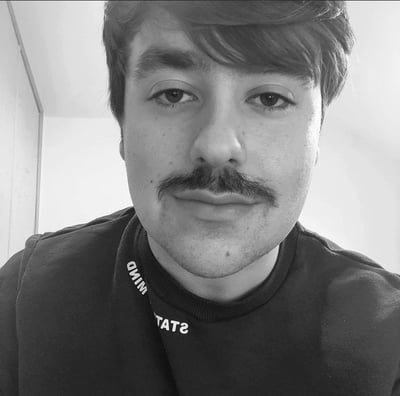 The College was quick to confirm that classes would remain online after Christmas, to offer as much certainty as possible for 2021, and we all joined together in a memorial ceremony for those who had lost loved-ones in the previous year.

January – always a month that feels longer than its 31 days – started with alternative assessments before Semester 2 classes began on the 23rd. At a time we needed to be buoyed up for fresh beginnings, the news of a continued lockdown hit us all hard.

The first day of Spring was marked by our Vice President, Professor Jimmy Hill, showing us all how to make St. Brigid’s crosses. February should have been a month when the NCIRL Instagram page was flooded with pictures of pancakes and Valentine's and Chinese New Year, all of which made us miss the campus even more, however settled we now are in a pattern of online learning. We were all grateful for #NCIGetFitinFeb to keep us centred and get us back on our toes! And socialising was taking place online, as this gathering of the Dance/Music Society demonstrates, celebrating their successful fundraising for Reaching Out Dublin, a voluntary organisation that provides food and essential supplies to rough sleepers. 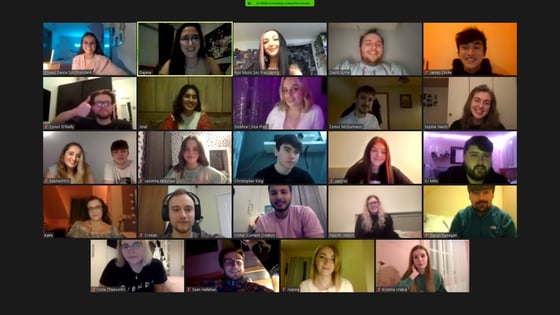 With March, we all felt it – the forthcoming anniversary. It just seemed unbelievable that it was heading for a full year since we were asked to leave the campus for two weeks……

However, there was still the business of the NCI Students’ Union elections, this time with all campaigning and canvassing occurring online, but nonetheless intense! This was also the first time voting took place remotely, a system that had to be devised by the current SU. And again, showing that we are not just keeping our heads down and getting through lockdown but truly making the best of it, voting this year also included the passing of a new Constitution, something the current NCISU President, Dajana Sinik, and Vice President, Conor O’Reilly, can be very proud of, as it will continue to have a positive impact long after we are (eventually!) back on campus. 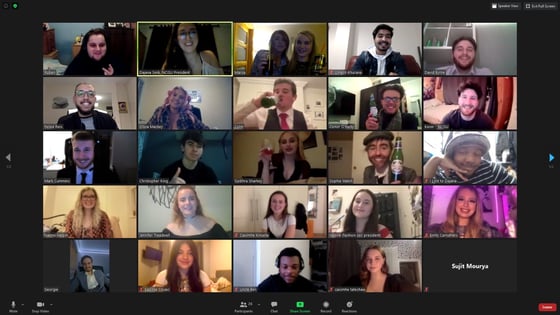 Who knows, with vaccines unrolling, maybe we can hope that our farewell and welcome celebrations, thanking the outgoing team and saying hello to the new, might happen in person in July? One way or the other, though, however we mark the passing of the baton, we will make it an occasion to remember!

For all that the past 12 months may seem both like a decade and the blink of an eye, when we look back week-to-week at all we have achieved, all we have celebrated, our coming together to mourn and comfort each other, continued support through counselling services or academic assistance or regular Getting to Grips learning sessions, careers advice re choosing graduate programmes or undertaking Master’s degrees, work placements and assessments, competitions entered, fun had, and lots of online classes, NCI students have much to be proud of.

At a time of global pandemic, when life was uncertain, when health was threatened, when we all had to make sacrifices to care for others and ourselves, NCI students continued to put the head down, work through the fuzzy concentration, and we kept on learning and progressing, no matter what. With vaccines already being unrolled, we have every reason to hope that we will not be celebrating a second anniversary of March 12th, but we are confident that NCI students are ready to move forward in any circumstance, asking for help when needed, taking a break if needed, but always ultimately advancing to achieve our full potential. We are living proof of the strength of the NCI community.