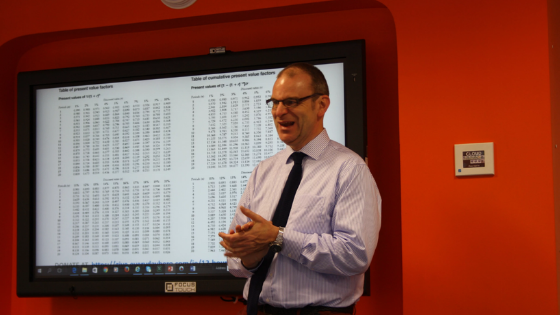 Desmond Gibney, an accounting lecturer from National College of Ireland, recently raised almost €6,000 for charity through a 12 hour non-stop lecture. The event was in memory of Eoin Fennessy, better known as Fenno, who graduated from NCI in 2004 and sadly passed away from a malignant brain tumour in 2016. Read more of Eoin’s story.

All proceeds will be donated to Our Lady’s Hospice in Harold's Cross, Dublin, who cared for Eoin in August and September 2016. The funds raised will be used to furnish one of the new en-suite single-bed palliative care rooms that are being built, which will transform the care and quality of life for patients and their families, at a time when they need that care most.

Desmond Gibney, who is pictured above during the lecture, said:

“Eoin was a student in my first-ever class when I started lecturing in NCI, and we kept in regular touch throughout the years. He was a great ambassador for NCI in the accountancy profession. Like many people, I was impressed with how he faced the challenges of his illness. I visited him many times in the hospice and saw at first-hand the care he received there. When I heard about the plans that Our Lady’s Hospice had to improve their facilities for patients and their families, I decided I’d do something to give other people the same care that Eoin had, and this 12 hour lecture has succeeded way beyond my expectations”.

The event, which was well-attended throughout the day by staff, alumni, well-wishers from Eoin’s employers BDO, as well as Eoin’s Dad, took place at NCI from 7am to 7pm on Friday, 20th January and covered various aspects of management accounting. Further contributions can still be made via the donations page.